Skip to content
Pera Toons supports the recycling of aluminum 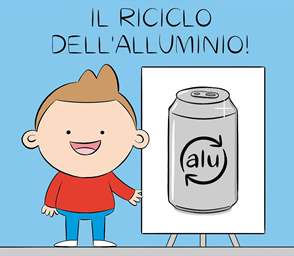 The original humor of Pera Toons’ jokes was chosen by CiAL – National Consortium of Aluminum Packaging – for a social awareness campaign on aluminum recycling.

The collaboration involves the publication on YouTube and on the social channels of the Consortium of 8 posts, based on the format of the “animated comic”. The first post – Aluminum recycling in 1 minute. Short Guide by Pera Toons – was shared on Earth Day on April 22nd. The subsequent contents will be published within 8 months and dedicated to the recycling of each specific aluminum packaging (beverage cans, aluminum trays, food cans, tubes, aluminum foil, caps and lids, spray cans).

CiAL has chosen Pera Toons as testimonial of the awareness campaign for its growing popularity on social networks, in particular towards the very young public, and for its original language that allows you to draw attention to an important issue such as recycling aluminum, in a light, but at the same time persuasive and effective way, through the irony, freshness and immediacy of animated comics.

The collaboration with CIAL is part of a phase of rapid expansion and new projects for Pera Toons: in addition to the constant growth in popularity on social networks, where he has built a community with 3 million followers in continuous growth, he is also achieving great successes in the field of ‘publishing. His latest book entitled “Ridi che è meglio” is firmly at the top of the sales charts, with over 35,000 copies sold and 7 reprints in a few months.

The licensing program has also started: the first licensing agreement has just been signed with BIEMBI for a line of stationery and gadget products that will be on the market starting from September and other negotiations are underway.

Watch the short guide by Pera Toons on aluminum recycling